While keeping up with the news about the devastation caused by Hurricane Harvey in Texas, Jim Rhodes of Aiken Equine Rescue wondered what was being done to help the Lone Star State’s horses during the horrible storm’s aftermath.

“There were systems in place for people and their dogs and their cats,” Rhodes said. “But there seemed to be very few systems in place to take care of large animals like horses. I run an equine rescue organization, and I felt a need to do something.”

Earlier this week, Rhodes began coordinating an effort to send stable gear, barn and veterinary supplies, feed, hay and bedding to Texas. Assisting him are farrier Dianne Lemmon and Mitch Lowery, a Hampton County-based veterinarian who does work in the Aiken area. 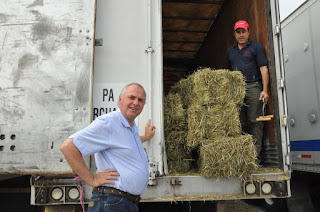 Aiken Standard Staff Photo by Dede Biles: Jim Rhodes, left, of Aiken Equine Rescue and Charles Doremus of Aiken Saddlery pose with some of the 250 bales of hay donated by Aiken Saddlery for the horses in Texas affected by Hurricane Harvey.

“It’s mind-boggling how fast this has come together,” Rhodes said. “I thought the logistics of it were going to be a nightmare, but everyone I’ve asked for help has been so cooperative. There was no hemming or hawing around. They just said, ‘Yes.’”

A truck filled with 250 bales of hay donated by Aiken Saddlery, 6 tons of sweet feed and oats donated by Banks Mill Feeds and shavings for bedding donated by Queen Wood Products of Allendale is scheduled to leave Aiken on Friday morning and head to the Delta Equine Center in Vinton, Louisiana. 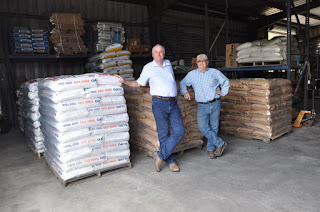 Rhodes found that facility, which is a veterinary clinic, through his contacts in the thoroughbred industry, and he’s been told that it will get the donations to the Texas horses that have been displaced and/or injured in the flooding.


“My goal is to put everything on the ground where it’s needed the most, and let the people there decide where it should go,” Rhodes said.

Anyone who would like to donate buckets, halters, lead ropes, bandages, insect repellents, ointments and other items can bring them to Aiken Equine Rescue at 532 Glenwood Drive or Aiken Saddlery at 1044 East Pine Log Road.

Rhodes also is seeking money to help cover the shipping costs. There are links to PayPal on Aiken Equine Rescue’s Facebook page and website, www.aikenequinerescue.org.
For more information, call Rhodes at 706-373-6350.

"I know we’re doing only a tiny bit of what is needed, but I couldn’t sit around and do nothing,” Rhodes said.

In addition, horses in Texas are going to benefit from a shipment of 493 bales of hay from Virginia that Rhodes and his associates arranged with a generous donor.

“We are very fortunate not have had this kind of catastrophe in Aiken, so we’re trying to support the horse community in the Houston area,” said Charlie Herrick, owner of Banks Mill Feeds, of his decision to get involved in the local Hurricane Harvey equine relief effort.

​Dede Biles is a general assignment reporter for the Aiken Standard and has been with the newspaper since January 2013. A native of Concord, N.C, she graduated from the University of North Carolina at Chapel Hill.

Posted by Equine Rescue of Aiken Blogger at 5:24 PM No comments: 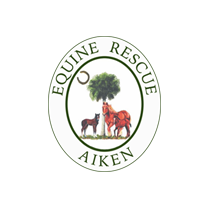 Aiken Equine Rescue needs your help to support all the animals at the shelter. Food, vet bills, farrier fees, general maintenance, etc. are ongoing costs. Consider making it a recurring monthly donation. A little each month goes a long way for Equine Rescue of Aiken. Click on the button below to donate today!

The Equine Rescue of Aiken was established in 2006 with 90 acres of land.

Since its founding, Aiken Equine Rescue has become the largest horse rescue center in the southeastern United States placing 800+ horses into adopted homes and rescued many horses, donkeys, and mules.

We provide each with food, medical attention, and personal care until we find them an appropriate home. With your help, we can be successful!